I directed and made an ending movie of “Everything becomes F” a Noitamina animation for Fall 2015. The movie is made with a method called “Generative Art” based on one of a main characters in the story Shiki Magata who is a genius programmer.

I uploaded some some codes used in this work but they’re might pretty disordered.

Here is a quick technical note.

“Generative Art” is an artistic field to create graphics, musics, or three-dimensional objects with algorithmic method like programing. Among them, Cellular Automaton (CA) a model studied in the field of complex system and computer science is mainly applied to the movie.

Motif (GUI framework) is (literally) referred from *nix from late-90s’ considering background of original novel and flashback of a character although the time setting in anime version is changed to 2015. My generation had not gone through the era in original novel so research was required to collect background information. There might be some conflict but hopefully the movie interests some original fans or hackers.

Below is tools used.

Since export did not go well, Visions of Chaos was simulated with VMWare Fusion inside Mac and captured by screenshot…

It is mainly used in intro and climax. OTCA metapixel which connects some “Game of Life” themselves like electronic circuit is applied. Samples are taken from “Golly’s LifeGame” or HashLife’s category.

An original rule used in the birth of objects. Leaving similar pattern as “Conway’s Game of Life,” it spreads less chaotically and simply to increase their areas so they can be seen in many parts of the movie. New rules of life span and maximum birth number are also added to make it more useful as a transition effect. Both active cells stay over their life spans or go though birth-death-cycle more than maximum number of birth are automatically killed and turn out to be nonactive objects changing their colors to text or UI of commands.

It is to create UI same as Generation Rule. The shape looks like chainsaw is interesting.

Used for the objects look like maze and skyscraper in mid-part.

It simply adds one active cell in every one generation used for QR code on beginning and tree-structure like neuron in final scene.

There are some other CAs like below. I will cut down details since it is little too complicated to go through.

It is applied to final neuron scene.
Several dots move randomly and ones stick “branches” are fixed. It took too long to glow enough so DLA is applied with “Filling Rule” to the tree-structure which is grown to certain level in advance.

It is applied to bunch of skyscraper-structures in middle part. However, edges were cut and cleaned with photoshop, UI-Conversion (explained later) was added, and arranged their UI pattern by hand so it was not really a generating.

It is little rude to explain too much but I have concerned about Shiki’s development environment. “RedMagic” in the story maybe came from “RedHat” so I mixed things up assuming it is *nix.

Boot message is by the way Debian base, Common Lips is rosettacode.org which is customized
to import the first condition of cells from external file.

Not only the result of CA simulation shows as dot drawings, but also each cells themselves are controlled to morph and to act as small parts of UI aggregate.

Moves cells like larvas. It is applied in QR animation in beginning, neuron in the final, forming of Shiki’s outline, and even PV of the animation.

Turns white part into mass of UI parts like an image above. Applied everywhere in the movie. 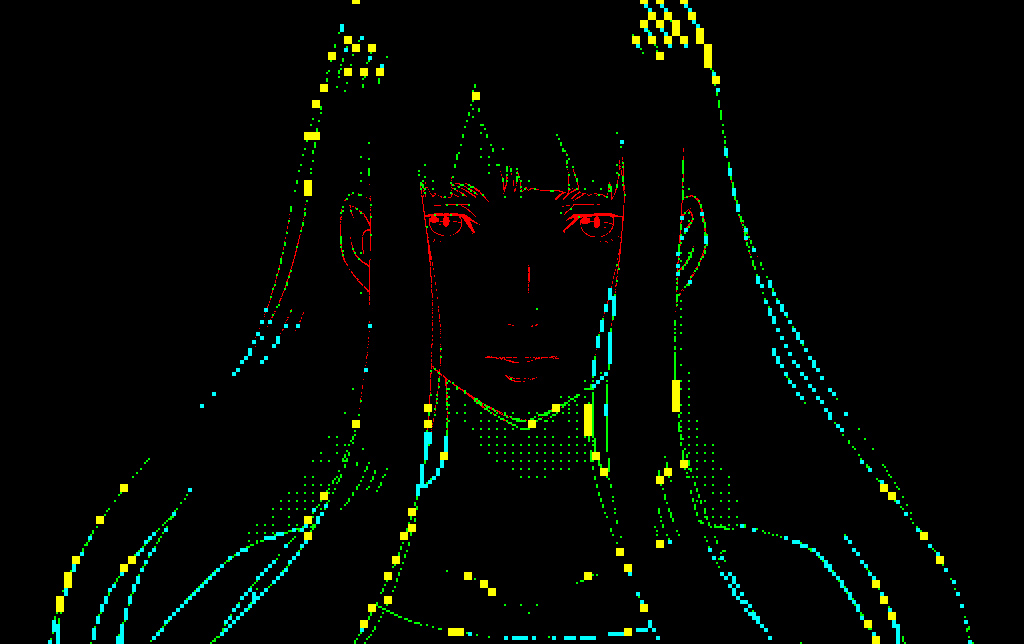 Structure of little windows forming Shiki in final scene is made of line-drawing material divided into 24 layers with 4 different resolutions. An image above shows 4 resolutions with different colors. Resolution is set not to go too rough to lose Shiki’s shape.

It is a simulation overwrites active cells onto each layers as initial state based on B23/23 with shorter life and fewer maximum birth number. Morphing and UI-conversion are added after the simulation. Cells around Shiki are normal “Conway’s Game of Life.”

Below is additional AE plugins I have purchased.

I have built a shell script starts p5 sketch from command line. It is capable of receiving argument on sketch side. “Life Game” of Shiki’s 24 layers are automated by this.

BTW, compositing movie with p5 spreads large amount of sketch per projects but I did not come up with quick way to put common code together so I had to just copied and pasted them. It takes too much effort to put them together into a library. I wish if I had any easy way to include other files with relative-path like I can #include inside Adobe ExtendScript…

Here is list of works I have referred consciously and unconsciously.

Other than above, the movie contains many methods like hand-drawing, arrangement using golden ratio, and generative approach.

Although I have been using programming since I was in elementary school, I am a wannabe-hacker who is not even from engineering field so these methods are not so professional but I would love to keep studying. It will be great pleasure to hear your advice!